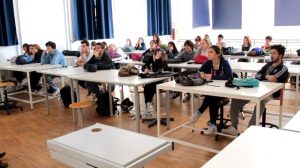 Bankrupt Artists, lesson nr … is an idea born in 2008 when I asked my former professor at the Academy of Fine Arts to give a lecture about failed artists. At the beginning the professor was interested but then he didn’t want to keep on because he was afraid about his and artist’s public image. This first lesson then became a failed project itself. For a period I decided to stop working on this the project, considering this failure as part of the game but in 2009 I decided to propose it again. The lesson was given at the IUAV University of Venice (2009), then at the Academy of Fine Art Albertina of Turin (2012), at Klee Barabino Art School of Genoa (2013) and NABA, Milan (2014), Academy of Fine Art Florence (2015), Centre Pompidou (2016). The goal of the project is to include the theme of failure in the Universities, or Fine Arts Academies teaching program